Many are still wondering how Donald Trump became president of the United States Of America, despite himself? Here’s an analysis, using SOSTAC® Planning Framework to explore some of Trump’s plan and to give some insights into his subsequent successful campaign. Comments are most welcome. Situation analysis (where are you now) , Objectives (where are you going?), Strategy (how do you get there?), Tactics (the details of strategy), Action (how do you ensure excellent execution) and Control (how do you know you are getting there – what will you measure?). I will use these to categorise various aspect of the Trump campaign but please remember this is just an outline not an in-dept detailed analysis.

Who – are Trump’s potential voters?

Trump focused on “left-behind” voters, specifically white working-class men (and women). He initially gambled on targeting one powerful voting bloc, (some pollsters thought this would alienate too many people) suggests Harvard’s professor Stephen Greyse (Fottrell 2016).   Clinton’s target audience was far broader, reaching out to the middle-class and “left-out” voters and black and Latino ‘left-out’ voters (many of whom had not yet a slice of the American pie). A month before the elections Trump had 57k transactors (contributors) of whom 68% were male and 32% were female, compared to Clinton who had 914k transactors of whom 36% were male and 64%  were female. Far more variables were eventually used to segment the market into dozens of target segments. In fact, a small English company who had also worked on the Brexit ‘Leave’ campaign for UKIP, worked for Trump and divided the US population into 32 personality types, and focused on just 17 states (see part 3).

Why – do Trump’s potential voters vote (what are their needs)?

Many people wanted change. Many others were frustrated and maybe even angry about their lives. Some have fears rather than hope. Is it possible that Trump’s upbeat’ #MakeAmericaGreatAgain or #MAGA hashtag played into the unconscious fears that if you don’t vote for Trump, America will get worse ie whatever is bad about America will become far worse? See the word-cloud graphics (in the final, ‘Control’ section) which demonstrates how Trump repeated these messages.

What the elite missed was the sources of the anger & resentment that has lead to the populist upheavals in the US & Britain & many other parts of the world (Harvard’s Professor Michael Sandel 2017).

Why were voters angry? What the elite missed was the sources of the anger & resentment that has lead to the populist upheavals in the US & Britain & many other parts of the world. (They) assumed it’s anger against immigration and trade and at the heart of that is jobs. But it’s also about even bigger things., about the loss of community, disempowerment, & social esteem (a sense that the work that ordinary people do is no longer honoured & recognised (& rewarded).’ Sandel 2017)

How – do Trump’s potential voters decide (how do they process information)?

Shorter attention spans. Research from Harvard revealed that attention spans for the first ever telivised political debate between JFK and Nixon back in 1960, was only 42 seconds (the maximum time to get a serious political message across). This fell to just 5 seconds in 2008 and even less since in 2012. There are many other variables involved here also, but, short attention spans is significant and perhaps gives a clue why Britain voted marginally for Brexit (short anti-EU messages had far more impact than long economic pro EU messages).

UK Company Cambridge Analytica analysed facebook data of millions of adult Americans, so that they could categorise personality types and then subsequently send them tailored messages that reflect their specific needs. ‘The company’s former boss, Alexander Nix, claimed, before the election, to have predicted the Big 5 score (personality analysis) of every adult in America. On Facebook, hundreds of ads were posted everyday targeted at specific personality types tailored towards people’s innermost fears, needs and emotions.’ BBC News 2018

It used an algorithm that analyses what people like (and don’t like ) on facebook to predict your personality. With just 10 likes it can predict what kind of person your are, better than your colleagues can. With 300 likes analysed, it knows your personality more accurately than your spouse does.

For more frightening insights into how this analytic tools and subsequent tailor-made ads were targeted precisely to each personality type, see The Dark Arts Of Marketing – Breaking Down Society to Create a New Culture – Using Data & IRD when a Cambridge Analytica whistleblower reveals the dark marketing techniques that were employed.

Major Market Trend – A Gap In The Market

We live in a post truth-era. ‘Dishonesty in politics is nothing new; but the manner in which some politicians now lie, and the havoc they may wreak by doing so, are worrying’ says the  Economist magazine (2016). The worrying phrase ‘post-truth’ was even named Word Of The Year by Oxford Dictionaries (Flood 2016). Defined by the dictionary as an adjective “relating to or denoting circumstances in which objective facts are less influential in shaping public opinion than appeals to emotion and personal belief”. The spike in usage, it said, is “in the context of the EU referendum in the United Kingdom and the presidential election in the United States”.

This is compounded by the moral vacuum which opens the gates for extremist politicians. Here is Harvard Professor Michael Sandel’s chilling observation: “… in the face of pluralism  and for the sake of toleration … to insist on a non-judgemental, value-free politics .. that creates a moral vacuum , a void, that will invariably will be filled  by narrow, intolerant moralisms.” Sandel (2017)

During the Republican nomination race, Trump saw a right-wing gap and went for it. He also analysed the political establishment through the eyes of disenchanted voters. Trump became the Republican candidate for the presidential election. Next, he analysed his opposition, the Democrats’, Hilary Clinton. When he found a perceived weakness that resonated with his voters (see the Control section in part 2) he went for it. President Obama had unprecedented success in targeting, organizing and motivating voters, we imagine Trump’s team studied this blog post How Obama Became America’s First Black President to understand his competitor’s strategy and tactics. 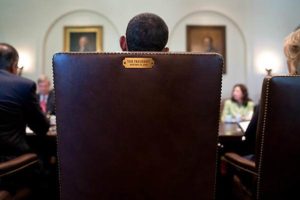 This image went viral during the 2008 campaign with the caption: ‘This seat is taken’

Originally to win the Republican Nomination and then, win the presidential election (after that we just don’t know).

Trump initially raised his own profile by making headline-grabbing statements, often by calling in to television shows, supplemented by a rally once or twice a week to provide the appearance of a traditional campaign (Bertoni 2016).

Trump’s son in law, Jared Kushner, took over the campaign, created this new strategy and, amongst other things,  set up a secret data operation-like a Silicon Valley startup. ‘Kushner eventually tipped the states that swung the election. And he did so in a manner that will change the way future elections will be won and lost.’ (Bertoni 2016).

Meanwhile, Trump positioned Clinton as an untrustworthy ‘insider’ and threatened to take her to court after the election. Clinton’s authenticity was challenged by high-lighting the fact that ‘she seemed to say one thing in her speeches and another behind the scenes, illustrated in her emails leaked by Wikileaks and “basket of deplorables” comments (Kanski 2016). The CIA revelations days before the vote appeared to attack Clinton’s authenticity. Or was all this information fed by the Russians? There’s definitely a movie in this story.

Apart from Clinton’s followers, one wonders whether the average American could relate to Clinton as easily as they could to Trump (or Obama in the previous two elections).

While Trump followers believed Trump had authenticity as he, rightly or wrongly, ‘says it like it is’.  The difference in authenticity, according to Kanski, was simply that ‘People can relate to bankruptcies, to locker room talk, to tough talk on terrorism, and that was the difference. Whilst Trump might be a billionaire, but he’s been bankrupt, uses locker-room talk i.e. his life experiences somehow seemed to resonate more with the average undecided voter.’

Trump stayed focused on the “left-behind” voters, specifically white working-class men (and women). As mentioned earlier, this was deemed risky (targeting one powerful voting bloc).  Clinton’s target audience, on the other hand, was far broader, reaching out to the middle-class and black and Latino ‘left-out’ voters (many of whom had not yet a slice of the American pie). Trump’s relentless use of data continually sharpened his targeting of those battleground states (the ‘swing states’, that over recent elections have gone both ways). They are the key to winning the election. In recent elections Florida and Ohio (3rd and 7th largest states, with 29 and 18 electoral votes respectively) have been swinging back and forth between the parties.

Within three weeks, in a nondescript building outside San Antonio, Kushner had built what would become a 100-person data hub designed to make more informed decisions (which leveraged the magic marketing formula – see part 2) across a selection of decision points regarding:

See How Trump Won (part 2) – using The Magic Marketing Formula – a SOSTAC® Analysis and later  – How Big data was used to win the election (part 3).

You might not enjoy, but perhaps need to see this video on behavioural analytics and precision targeting:
The Dark Arts Of Marketing – Breaking Down Society to Create a New Culture – Using Data & IRD

How SOSTAC® Works – a 4 minute video by PR Smith

The SOSTAC® Guide to your Perfect Digital Marketing Plan 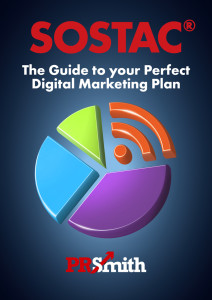 Kanski, A. (2016) Change and authenticity: The messages that won over American voters, PR Week 09 Nov.

Join Me At My Next Event

AI, INNOVATION & ETHICS IN MARKETING – every Friday 3.30pm GMT I run a 30-minute chat  (also includes a SOSTAC ® Q&A) in the SOSTAC® Plans Club in the clubhouse app.   Listen to previous chats; read 60 second summaries and get the link for the next chat.

Other Dates For Your Diary

06 May  AI, Innovation & Ethics in Marketing + SOSTAC® Q&A – a 30 minute chat with PR Smith and friends re cutting edge marketing  [Open to Public]

13 May  AI, Innovation & Ethics in Marketing + SOSTAC® Q&A – a 30 minute chat with PR Smith and friends re cutting edge marketing  [Open to Public]

20 May  AI, Innovation & Ethics in Marketing + SOSTAC® Q&A – a 30 minute chat with PR Smith and friends re cutting edge marketing  [Open to Public]

27 May  AI, Innovation & Ethics in Marketing + SOSTAC® Q&A – a 30 minute chat with PR Smith and friends re cutting edge marketing  [Open to Public]